Friedrich-Ebert Foundation Rwanda in partnership with the Federal Foundation for the Study of Communist Dictatorship in East Germany and the Federal Government Commissioner for the New Federal States.

Germany and the rest of the world are commemorating 30 years after the fall of the Berlin Wall and the country’s reunification in 1989/90. In Rwanda, the ceremony was held on October 4 at the offices of the Friedrich-Ebert-Stiftung (FES) in Kigali.

Opening the function, the Director-General of the Institute for National Museums of Rwanda Ambassador Robert Masozera talked about the importance of memory and commemoration while Dr Markus Pieper, the in-charge of memorial sites and museums at the Federal Foundation for the Study of the Communist Dictatorship in Eastern Germany delivered a paper titled “From Peaceful Revolution to German Unification”.

The Chronicles spoke separately to Dr Pieper on a number of issues, including the role of memory and commemoration in reconciliation after genocide, lessons from his country’s experience, rising ultra-nationalism in Europe and future of democracy on the continent as well as the sustainability of the European project amidst BREXIT and rising populism.

To Dr Pieper, following the Holocaust and the Second World War, the process of confronting the past by the German people was only possible because of the political will that facilitated reconciliation with surviving Jewish and European states that had been devastated by the war.

Within Germany however, this process took long to materialize as many Germans weren’t open to discussing and owning this history immediately after the Second World War.

After some years, he says, a kind of self-critical view “very, very slowly developed” on what had happened and the responsibility of Germany in the holocaust and the Second World War.

If Germany had not accepted its role and taken seriously the remembrance of the country’s horrific actions, argues Pieper, there would not be harmony with Jews and the country’s neighbours today.

“….from our experience, it takes a very, very long time” to have reconciliation, “And it can be a very painful process in society, but we think it’s worth doing it because living in peace and harmony, not only in one country but with your neighbors” is important, he says.

Dr. Pieper says that like in German where the political establishment was all in support of remembrance and reconciliation, the same is happening in Rwanda today; although he acknowledges that, unlike in his country where accepting and dealing with the past took a long time, Rwanda confronted its past immediately after the 1994 genocide against the Tutsi and kick-started the process of reconciliation.

To Dr. Pieper, remembrance is important for reconciliation because of three reasons. They are: preserving memory to avoid repeating mistakes of the past; dignifying victims and facilitating forgiveness.

He said: “Somebody who is much cleverer than me once said: ‘If you don’t know your past, you are obliged to repeat it’. So, this is the main reason. We want to know what has happened, we want to know not only who committed crimes, or the persons themselves, but what is very important is to understand the political structures…in society that led to these dictatorships. We want to understand how it was possible that they worked, to prevent us to repeat the same mistakes as we did before”.

He added, “…then…there is the dignity of the victims… it is very important to remember their names and what they went through…And then of course, for this process of reconciliation it is very important, because we think that there is no reconciliation possible if people don’t know what was going on. Before people can forgive each other, they have to know what has happened, without that we think that it is maybe impossible, or at least very, very difficult”.

Critics of remembrance aren’t limited to Rwanda but were also prevalent in German. Observes Pieper, “We had exactly the same voices in Germany. There was a big debate in 1989-1990” on whether “the files of the political police really should be opened to the public, or not. Some people even said this will cause a civil war in our country. But a lot of people that suffered from the political police, people that were fighting for democracy, freedom, and the unity of the country…said, ‘no, there won’t be a process of reconciliation possible if we don’t know what exactly happened’…”

And to Dr. Pieper, the greatest lesson from the fall of the Berlin Wall and reunification of East and West Germany is that it is possible to peacefully fight and defeat a dictatorship.

On whether the rise of another dictatorship in Germany is possible, he says, “Of course it’s hard to say, as a historian… [I] work on the past and not on the future…we all hope that this is not going to happen… And I think that the situation today is very different from what we had eighty years ago, or almost ninety years ago, in the 1920’s and the 1930’s. The democracies in the west, and in Germany as well, are much older. We had this experience already, of the dictatorships, so people know what it means to live in a dictatorship. But still, we see new populist parties or movements popping up everywhere, and of course, this might be a special danger”.

And on whether the European Union project is sustainable, he says: “I don’t think the European project or the democracy in Germany is in danger. But of course, this is what we as historians tell the people, ‘have a look [at what happened] in the past, see how democracy can change into a dictatorship’. But it is very hard to say exactly what is going to happen”. 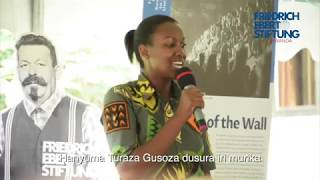