As the Covid-19 pandemic continues to wreak havoc across the world, claiming lives, ravaging economies and destroying livelihoods of millions of people, different countries, poor or rich have mounted a host of responses aimed at defeating the pandemic.

From a public health perspective, the responses have ranged from those aimed at controlling the spread through closing all points of entry into countries, mass testing, quarantining, treatment, as well as implementing comprehensive lockdowns, which have kept people at home for months.

The measures implemented by governments to curtail the spread of Covid19, have however subjected people to far-reaching social-economic challenges, from loss of employment, affected trade flows as well as depressing key sectors like tourism and aviation.

It is against this background that FES Rwanda in collaboration with EPRN (Economic Policy Research Network), organised on the 29th of April 2020 a “digital breakfast, that brought together policy makers, researchers, trade unionists, journalists in a zoom discussion, looking at the consequences of the pandemic to the East African (EA / EAC) region through social-economic and leadership prisms.

The topic under discussion was “Six weeks after the COVID-19 confinement: What are the social and economic perspectives for East-Africa?”

Early on in Prof Musahara’s presentation, it became clear that despite recording fewer Covid-19 cases compared to countries in other blocs, especially those in Asia and Europe, countries in the East African region, and Africa as a whole are likely to face the most severe economic headwinds, largely because of their fragile resource structures.

The presentation shed a light on what is at stake in the region as the wrecking ball that is Covid-19 rages on, at nation, household and individual standpoints.

It also gave a deeper look into the consequences of the confinements, from demographic, gender, family and food supply dimensions, pointing out the demand and supply shocks, medical shocks, which are already being felt in the region.

The hand-to-mouth members of the region’s economies, as well as other people in the informal sector and SME’s, are already feeling the pinch, after being out of work for months, as countries take drastic measures to curb the spread of Covid-19.

It came out that strong leadership and how responsive government institutions are in this time has shaped how countries have responded to containing the spread, but also to efforts aimed at minimizing the effects of the confinement and other complications related to fighting the pandemic.

Different EA countries like Rwanda, Uganda and others have responded by the distributing food relief to the most vulnerable households, using resources mobilized from national budgets, as well as contributions from the private sector.

A section of high-ranking government officials in Rwanda forewent their April salaries in order to contribute resources to support vulnerable citizens affected by the lockdown.

Prof Musahara painted a picture that the entire regional population of 177million people, where 22 million live in urban areas, will be affected in one way or another, due to the fact that the pandemic affected key revenue generating sectors like tourism, MICE and trade.

Tanzania and Rwanda get up to 10 per cent of their GDP from tourism, where the latter earns close to $400million annually from tourism, it will even take tourism longer to recover even after the pandemic is subdued because of how sensitive the sector is.

Up to 1million jobs in the tourism sector alone are likely to be lost as a result of the pandemic.

It was pointed out that Africa will need up to $100billion to recover from the shocks of the Covid19 pandemic; however the recovery will also sink the continent deeper into debt, even with a martial response plan in place.

All countries, developed and underdeveloped were caught flat footed by the pandemic, and this was manifested in how even rich economies struggled to obtain enough key life saving equipment like ventilators, which drove some countries to force their car manufacturing companies start making ventilators.

The situation became even worse for poor African countries, where up to 10 countries were found not to be having a single ventilator, while many were in double-digit numbers.

During the discussions, the audience asked questions, for instance how possible it has been for some countries that have also been adversely affected by the pandemic, to reach out to others in Africa with financial support, which came down to the availability of excess resources by the countries that reached out, but also the culture of benevolence ingrained in some societies.

Another question was around how long it is likely to take the East African region and the continent as a whole to recover from the consequences of the Covid19 pandemic, which came down to how committed and coordinated the countries will be, to an honest and proactive recovery plan.

In the discussions it came out strongly that the EA member countries for instance will have to put aside their differences and deal with the pandemic together, as well as the post pandemic recovery, through opening their borders and facilitating intra-regional trade.

A multi-lateral response was also suggested, urging the African Union and its member states to work together on a joint menu of interventions for recovery, and to develop a strategy of response to future pandemics.

Prof Musahara pointed out that lessons will have to be drawn from past economic and social setbacks, for instance how Rwanda recovered from the 1994 genocide against the Tutsi, to forge a post Covid19 recovery path.

The discussions were rich, and the virtual breakfast meeting was well attended-in excess of 50 participants, which came out to even be more than the number that normally attends the face-to face breakfast meetings at FES.

The key takeout was that no country was prepared enough for the Covid19 pandemic, and even for response countries were learning on the job, and the recovery will be even harder especially for poor countries, but countries will have to learn from this to invest more in their public health systems and also allocate resources to help execute timely responses to future pandemics. 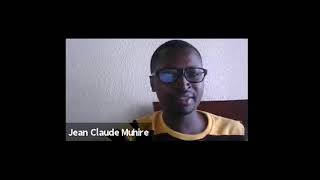