social protection and strengthening the national and international labor standards in Rwanda” (SD4SD) in partnership with the Congrès du Travail et de la Fraternité (COTRAF) and co-financed by the European Union. 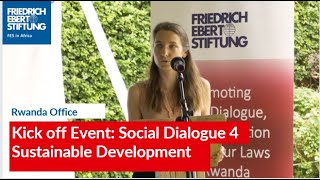 With guests from several trade unions and the Ministry of Labour as well as the Ambassadors from the European Union and Germany in attendance, the project already enjoyed great interest and support for its official kick-off. Representatives from all parties involved used the occasion to present the project to the assembled guests and the Rwandan public.

In the coming three years, FES Rwanda and COTRAF will set out to improve social dialogue in Rwanda by focusing on the three key sectors tea plantation, mining, and education, which together account for 17% of the Rwandan workforce. To achieve this goal, FES Rwanda and COTRAF will support these trade unions campaigning in their long-standing struggle for improved occupational safety and higher salaries, as well as the implementation of international labour standards with a special focus on the role of women and children.

Effectively fulfilling this objective requires not only a strong cooperation with the trade unions, but also an intensified social dialogue between trade unions, employers and the government. The project team will facilitate this tripartite dialogue by emphasizing the mutually beneficial effects of social dialogue and its necessity for sustainable economic growth on Rwanda’s path to become a middle-income country by 2030. With the project now officially and successfully launched, FES Rwanda and its partners look enthusiastically forward to the coming three years of intensive engagement in and for the Rwandan labour sector.

CHECKOUT FOR THE EVENT PHOTOS