Since last year, the Fredrick-Ebert Stiftung office in Rwanda (FES Rwanda) embarked on a project to write a comic book on 17 SDGs. The objective of the project was to simplify understanding of SDGs and to raise awareness among development actors from the grassroot using the comic book. The process was completed on Thursday May 14th, 2020 with the launch of the book held in a virtual zoom meeting.

The virtual book launch was organized by FES Rwanda in collaboration with UNDP Rwanda. The virtual meeting was attended by people from different background including development actors, academia, journalists, local and international NGOs, FES partners, FES staff, authors of the book as well as members of partner organizations, who shared insights about the relevance of SDGs after five years since they were adopted by UN in 2015.

The SDGs comic book project is part of other FES programs around social protection, good governance, and inclusive economic transformation that FES partakes in at different levels to contribute to achievement of Sustainable development.

The book uses ordinary Rwandan characters from a wide array of professional domestic setting who are engaged in a conversation about issues about their lives, the life of their neighbors and that of the wider community.

In his opening remarks, Oliver Dalichau, the FES Rwanda Country Director welcomed and thanked the participants. He went on congratulating all the people who took part in the production of the comic book. He added that for FES, the book is time for reflection on SDGs after 5 years of implementation. “For FES, this is another occasion to reflect on what should be done to improve awareness and engagement in SDG's”.

The moderator, Julius Bizimungu then welcomed the presenter of the book, Salvatrice Musabyeyezu, who said that the comic book is a commendable feat achieved by FES, that sets a baseline even for future work in communicating SDG's. “The comic book is simply about communicating and understanding of 17 SDGs. The book is talking about the 17 SDG's in a simple way, weaved around a conversation of six Rwandan friends in their domestic setting ”she said.

She pointed out that the Covid-19 pandemic has challenged people on how they understand SDG’s, and that launching this book at such a time helps to shade more light on the real life problems that need to be addressed by SDG’s and by everyone.Creating synergies and collaboration between different actors in the implementation of SDG’s, is crucial. SDG’s are not a stand-alone set of developmental targets, but they are implemented through other development programs for governments and other actors. What is important is how development actors link SDGs to their mission and vision in the implementation of various projects.

It was mentioned that one of the key aspects that strongly came out in the comic book, is that SDG’s are about understanding and ownership to ensure implementation. The book has simplified the SDG themes into everyday decisions that people are faced with to make the world a better and safer place for all human being and the planet.

During the questions and answer sessions, a question was asked of how Rwanda can stamp out hunger and food insecurity, as stipulated in the second SDG”Zero hunger”.

It was also noted that Rwanda has already made considerable strides in achieving this goal, through social protection policies like Girinka, Ubudehe among others. It was mentioned also that by enabling smallholder farmers and improving access to financial opportunities, increased agri-business and productivity and this helped to address the problem. However, this is an ongoing process that requires combined efforts of each and everyone.

Participants shared the idea that the Kinyarwanda version of the comic book can be disseminated to the various lower local levels, such that grass root leaders can understand SDG's in such a simplified way.

It was also asked if FES has plans to develop more comic books, this time tackling each SDG in depth.

The guest of honor, Stephen Rodriguez, the UNDP Country Director in Rwanda, congratulated FES upon the comic book launch, saying that it is a powerful resource that will help a lot.

“It was quite a delightful read, everyone has a voice in the conversation, key nuances like gender equality were brought out well” he said.

Mr. Rodrigues pointed out that the UN Secretary General declared the SDGs a decade of action and added:

“So what can we do, the resources we need to achieve SDG's are already there but not evenly distributed”, calling on the global community to prioritize SDG's.

He said that Rwanda, poor country as it is among the top 10 countries to achieve MDG's, largely due to good governance, and has already integrated SDG's in its national development plans like vision 2050, which can serve as an example for other countries.

The UNDP Rwanda head also observed that the SDG's are an agenda for the people, with a bottom up approach, and that this should be observed at all levels to ensure participation.

“The average people are not adequately engaged in the SDG conversation, and there have not been tools to use in engaging people at the grassroots, this comic book serves this purpose,” he noted.

Concluding, Mr Rodriguez called for collaboration and partnership to act in the implementation of the SDGs. 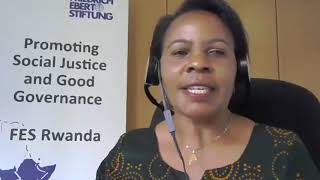 How would you start a conversation with your friends about the Sustainable Development Goals (SDGs), the collection of global goals aimed at addressing everything from hunger, to poverty and ensure the well-being of humanity?

Well, a new comic book by Friedrich-Ebert-Stiftung (FES) Rwanda attempts to visually break down these goals suing visual characters that are simple to understand.

The book, launched digitally on Thursday, is a glimpse into the 17 goals that world leaders set out to achieve to end poverty, protect the planet and ensure that all people enjoy peace and prosperity by 2030.

The book is about the current concerns on how the world population can meet their present needs while sustaining resources for the needs of future generations.

It is based on a character of a young female journalist, Rita Umuhire, who is curious enough to write about the most pressing challenges the world is facing, and goes on an exploratory journey to discuss with his friends.

Oliver Dalichau, the resident representative of FES Rwanda, said the organization has in the past worked on different projects and noticed that the level of SDGs knowledge is very different.

“This is part of the reasons we came up with the idea of translating the ambitious 17 goals of the global community into a "comic book" with a special focus on 6 young Rwandans discussing the objectives,” he said during a virtual launch of the book.

The Sustainable Development Goals were launched in 2015, and it’s just 10 years away for the implementation of these goals to come to an end.

However, there is still limited awareness about these goals in some countries, despite being considered key to addressing some of the big challenges facing the globe.

A study commissioned by the World Economic Forum indicated last year that three out of four adults (74 per cent) globally have some awareness of the United Nations Sustainable Development Goals (SDGs).

Stephen Rodrigues, the Resident Representative of UNDP Rwanda endorsed the new comic book, saying it is a great tool to raise the awareness around SDGs and their implementation.

The SDGs aim at creating a better world where there is more equality of opportunity, less poverty and hunger, where people have access to quality education and quality healthcare, and where there is clean water and environment, among other things.

“We need that world, and if we need it, we need global citizens not just to contribute towards that vision and to understanding where we are going, but we need everyone to join efforts,” Rodrigues noted.